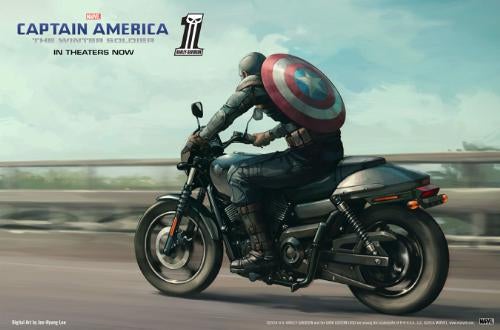 MILWAUKEE, April 15, 2014 /PRNewswire/ — Harley-Davidson and Marvel Entertainment, LLC, have teamed up once again to defend freedom and tame explosive city streets in – and beyond – the popular film franchise, Marvel’s Captain America: The Winter Soldier. Since the early days of Captain America, he has been associated with Harley-Davidson, and the latest chapter of the film saga is no different as the Super Hero now revs up a brand new Harley-Davidson Street 750.

To unite fans of both brands, Harley-Davidson is seeking candidates to join Captain America as “Agent 1” and star in a brand-new digital franchise, which will introduce a new chapter of action, including a group of characters created by Marvel’s Custom Division exclusively for Harley, and feature the new Harley-Davidson Street 750. The mini-movie and digital comic will debut in Marvel and Harley-Davidson online and social channels this summer.

There will be more than just the noise of motorcycle engines on the road this bike season as oil-painter Allan Gorman makes the debut of his unique series of Harley-Davidson motorcycle inspired artworks at a number of prominent dealers in the NY/Phila metro regions with a pop-up show tour he calls: The Ready to Rumble Road Show.

In addition to creating a striking and unusual series of paintings, the artist has also conceived a more suitable and fun way to show them. Gorman’s art typically shown in fine art galleries and major art fairs, will now be displayed in the showrooms, alongside the beautiful bikes that inspired them.