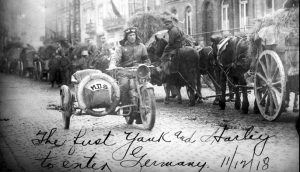 For more than 25 years, the identity of the soldier in this now-famous photo remained a mystery. Then one day in late 1943, a visitor to the office of Enthusiast magazine inquired about the June 1943 issue: “I understand that issue has a picture of me in it,” the stranger said, “and I’d like to get a few extra copies as a remembrance.” The magazine staff was shocked – and not sure what to believe at first. But the story that Ray Holtz, of Chippewa Falls, Wisconsin, told next convinced them he was who he claimed to be: “The First Yank and Harley to enter Germany” following the end of World War I.

Holtz’s tale kept the editors captivated as he told them how he, a corporal in the U.S. Army, and his captain were captured by German forces in Belgium during an ill-advised night mission on June 8. Three days later, when word of the armistice treaty reached their captors, the men and their Harley-Davidson motorcycle were released. They returned to a small Belgian village near the German border, where the next day, Holtz rode into Germany to become the first American to enter the newly occupied country. It was an exciting day for the world – and a proud day for Harley-Davidson and all the Allied forces the Motor Company helped equip.