As a military apparel company, it is our goal at Harley-Davidson Military Sales to celebrate, honor, and commemorate our brave U.S. Military members, both active and veterans. This desire to uphold and honor our military community goes beyond selling merchandise. We believe we also hold a financial and moral obligation to support our military communities. Harley-Davidson Military Sales, as a part of the Overseas Military Sales Group (OMSG), is proud to share with our customers that we fulfill these beliefs through donations, as well as Morale, Welfare, and Recreation (MWR) events. 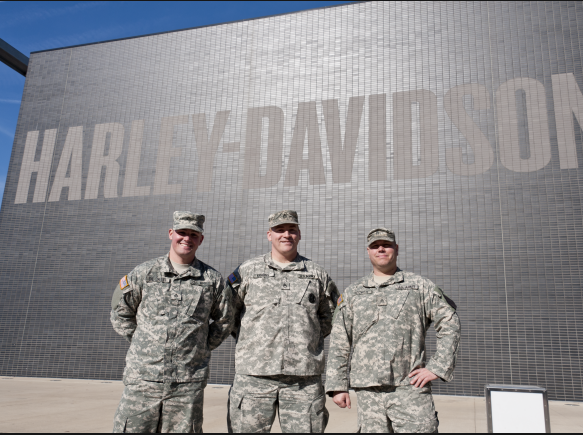 Harley-Davidson Military Sales is a part of the Overseas Military Sales Group (OMSG).  OMSG also includes Military AutoSource, the on-base, overseas distributor of Harley-Davidson motorcycles to the U.S. Military. As the overseas distributor, we have a presence on almost every overseas military installation – from the Middle East, to the Pacific Rim, to Europe – giving our active duty military members privileged military pricing and benefits on new motorcycles. To learn more about our on-base Harley-Davidson program, please visit www.militaryautosource.com/harley-davidson

How We Give Back

As a company, and more importantly, as proud military supporters, we’re delighted to be able to give back to the military community in a number of ways. A portion of every vehicle sold by the Overseas Military Sales Group is returned directly to the military community. The OMSG associates also hold fundraisers throughout the year, proudly donating all proceeds to the Wounded Warrior Project.

Aside from financial donations, our company also supports the military through Morale, Welfare, and Recreation (MWR) events. MWR covers a range of community support and quality of life programs for the Armed Forces and their families at the more than 2,000 facilities on U.S. military bases worldwide.

Military AutoSource hosts many MWR events throughout the year on military bases around the world. This past July 4th, as millions of Americans celebrated at backyard BBQs, Military AutoSource hosted MWR events in Afghanistan, Djibouti, and Germany. One event we hosted in Bagram, Afghanistan was the “Operation Riding Freedom” event where one lucky Marine even walked away the winner of the 2015 Harley-Davidson Street 750.

We are very proud of our great relationship with the U.S. Armed Forces, and it is an honor for us to give back to the brave men, women, and families who give so much for us.

We invite you to check out some of the great pictures from our recent Morale, Welfare, and Recreation (MWR) events around the world!